Carbon capture is not a climate solution 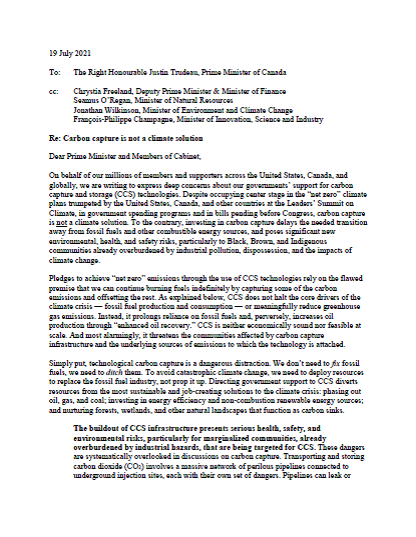 On behalf of our millions of members and supporters across the United States, Canada, and globally, we are writing to express deep concerns about our governments’ support for carbon capture and storage (CCS) technologies. Despite occupying center stage in the “net zero” climate plans trumpeted by the United States, Canada, and other countries at the Leaders’ Summit on Climate, in government spending programs and in bills pending before Congress, carbon capture is not a climate solution. To the contrary, investing in carbon capture delays the needed transition away from fossil fuels and other combustible energy sources, and poses significant new environmental, health, and safety risks, particularly to Black, Brown, and Indigenous communities already overburdened by industrial pollution, dispossession, and the impacts of climate change.